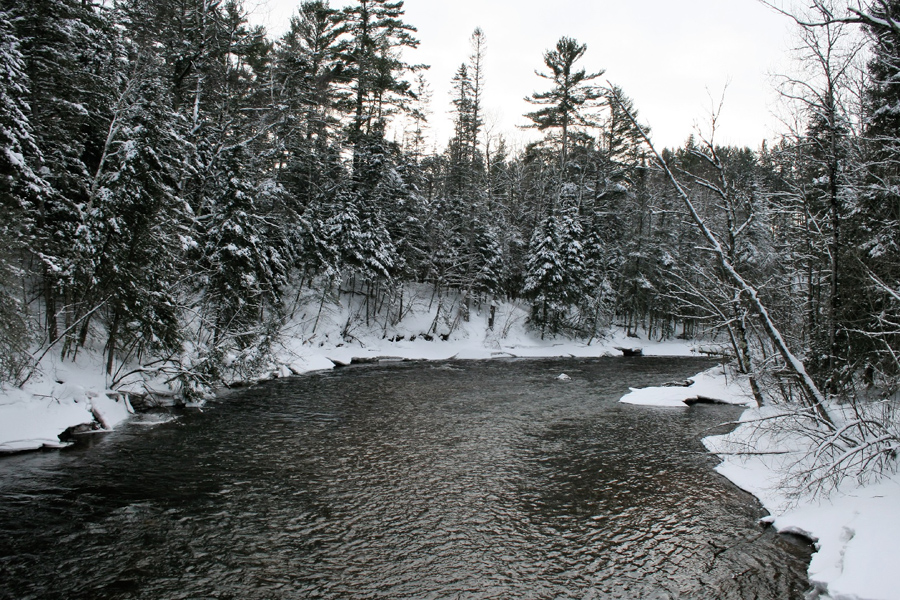 The Bois Brule River at the Winneboujou Bridge.Photo credit: DNR

The uniquely Wisconsin sturgeon spearing season opens Saturday on the Lake Winnebago system. Water clarity and ice conditions are the two most important factors affecting the season, and conditions are less than ideal.

Snowmobile trails are still in good condition across the northern half of the state according to the travelwisconsin.com Snow Conditions Report. Cross-country ski trail conditions are good across much of the state.

With the recent warmer weather, animals such as opossums, raccoons and skunks have been up and walking around. Snowy owls have begun showing up in the southern portion of the county. Despite the cold temperatures, songbirds such as cardinals, titmice and chickadees are singing and displaying. Great-horned owls are nesting, and turkeys are beginning to show. Raccoons, squirrels, coyotes and wolves have started breeding, and will soon be looking for den sites for their young.

Anglers at Voyageur Park reported a good bite for walleyes on jig and minnows or jigging raps. Long Tail Point and Sunset Beach Road had moderate fishing pressure, and it was slow fishing for northern pikes. A few whitefish were seen off the mouth of the Suamico River. Hook Road had heavy fishing pressure, especially over the weekend. Fishing was reported to be hit or miss with a few keeper-size perch caught during the week and mainly small ones over the weekend. Both minnows and waxworms were catching fish.

Sturgeon Bay anglers are reporting varying thicknesses of ice, between 4-12 inches in some locations. With anglers reporting up to 6" of slush and water on top of the ice in some areas, foot traffic is difficult. Also, with the recent warm-up and heavy traffic, some landings along the east shore are starting to get soft in places as well. Overall, fishing mid-week sounds like the best time to catch fish, or if you can get away from the crowds, you will do better for whitefish and perch.

Anglers fishing off of Old Stone Quarry report slow fishing for whitefish and perch, with ice thickness ranging from 4-10 inches. Anglers who were fishing the boat landing/breakwater area after dark report catching some smelt on waxworms and small jigs.

Anglers recently fishing at Carmody Park have reported catching a few keeper-perch but were having to sort through lots of smaller fish. Anglers fishing out in deeper water reported catching whitefish with a few nicer perch mixed in. Lime Kiln, Clafin's and Big Rock Place had heavy fishing pressure last weekend, and light pressure during the week. Slider rigs with small flies tipped with waxies for the top hook seemed to be catching the most fish. Riley's Bay had heavy fishing pressure over the weekend with few fish to show for it.

The weekend saw increased activity from northern pike anglers at Geano Beach. Whitefish were caught by the mouth of the Oconto River in low numbers this week, and some small perch were caught by the city docks. Anglers were catching 1 to 4 whitefish using spoons with waxworms or minnow heads. Several anglers were fishing the bay for northern pike from Oconto Park II south past Oconto Park I.

Sturgeon spearing ice conditions on the Winnebago System range from 4-12 inches thick. Ice safety this upcoming weekend will be paramount. Please bring along safety equipment and use caution. Warm temperatures and high winds have caused the ice to buckle, and in many places, the ice is honeycombed.

Water clarity and ice conditions are the two most important factors affecting the annual sturgeon spearing season on the Winnebago System, and conditions are less than ideal. The majority of the lake has 8-12 inches of ice, but it's patches of thinner ice (4-6 inches) that cause concern. Water clarity also is variable with reports ranging from 7-10 feet of visibility, which is below the 12 feet average threshold that typically equates to a shortened spearing season where the harvest caps are reached.

The Upriver Lakes, particularly Lake Poygan, appear to have better ice conditions and water clarity doesn't impact harvest as strongly. Therefore, we are anticipating a more successful season on the Upriver Lakes with a total harvest similar to year's past.

Snow is quickly leaving the landscape and what is left is hard and crusty. Deer and turkeys can be seen frequenting area farm fields searching through the crust of snow. With the recent warmer weather, animals such as opossums, raccoons and skunks have been up and walking around. The Wisconsin River is open for much of its stretch near Portage and bald eagles can be seen fishing it. This may be drawing eagles away from the Prairie du Sac area, which normally has some of the only open water around. The eagle sightings are much lower in that area right now. Snowy owls have begun showing up in the southern portion of the county. "Columbia" was trapped and fitted with a radio transmitter last week. You'll soon be able to track her movements here: https://www.projectsnowstorm.org/snowstorm-owls-winter-2019-20. Blue birds have been seen throughout January checking out local bluebird boxes.

A few snowy owls have been seen in the area. Some bucks are shedding antlers. Crusty snow makes food access difficult for small animals. Poor ice is making trapping difficult.

Over the past week at Brule River State Forest, we have experienced several light snowfalls, which make conditions almost ideal for observing animal tracks and activity. A staff member reported a bobcat sighting and saw some tracks.

Late January and February is the time of year when wolves begin to breed in Wisconsin. The female typically delivers her "pups" about two months later in a den. Wolf pups are born deaf and blind and weigh approximately 1 pound. Pups can see at two weeks old, and hearing develops after three weeks. At this time, they become very active and playful. See some wolf tracks at the forest below.

A little bit of songbird activity has been seen at bird feeders -- from gold and purple finches to nuthatches. Gray squirrels are starting to chase each other around, and foxes are marking their territory for mating season.

At Lakeshore State Park, waterfowl including red-breasted mergansers, greater and lesser scaup and golden-eye continue to be seen, as well as our resident American kestrels near the south entrance.

Despite the cold temperatures in Milwaukee, songbirds such as cardinals, titmice and chickadees are singing and displaying. Great-horned owls are nesting, and turkeys are beginning to show. Raccoons, squirrels and coyotes have started breeding, and will soon be looking for den sites for their young. As such, it is common in February to see wildlife more active, searching for a mate, or a den or nest site, or looking for food during these colder winter months

Trails are icy, and grippers are recommended at Horicon Marsh State Wildlife Area. Winter birds are still scarce. Tree sparrows can be seen regularly as well as a few rough-legged hawks. A few snowy owls have been seen west of Horicon Marsh.

Melting conditions from last week left Council Grounds State Park with a bit less snow on the ground, but there's still plenty for skiing and snowshoeing. Wildlife has been active with the above-normal temperatures. Look for deer in the woods and open areas and otters on the river.

The warm weather has negatively impacted trails and lakes at Flambeau River State Forest. Snowmobile trails are still in good condition, but corners have a lot of ice on them and riders should use caution. The lakes have a lot of slush and may continue to be that way until we have some frigid temperatures to lock it up. Ski trails are still in good shape as well, but grooming operations will slow until more snow arrives. Snowshoeing is excellent right now as the snow has some pack to it.

Most of the Kettle Moraine State Forest - Northern Unit is still covered with 6 to 8 inches of snow. The snow has changed much since last weekend, it is now a very hard crust. Hikers looking to enjoy the loop at Butler Lake or the Ice Age Trail are recommended to bring yak-tracks or crampons of some sort. Snowshoes are still a good choice. Hikers will also enjoy the loops at Long Lake Campground as the campground is shut down this time of year. Parking is available at the boat launch or south beach lot. Hikers, please stay off the ski trails at Greenbush and Zillmer, it is illegal to walk on them when the trail is snow covered. Last weekend we found many people walking them and they left deep ruts which took staff/volunteer time to repair. Unless we get more snow, skiers at Zillmer and Greenbush will likely prefer to enjoy the trails in the afternoon. If you see anyone snowshoeing or hiking the DNR ski trails, please report this illegal activity to the DNR Violation Hotline at 1-800-847-9367. Fat-tire mountain bikers at the Greenbush and New Fane bike trails may want to use studded tires as the thaw-freeze cycle affected those as well. Chickadees and cardinals are starting their mating calls.

Warm conditions throughout the weekend melted all the snow off the trees and formed a hard crust on top of the snow in Iron County. Trails are hard-packed and stiff. The extreme cold has created ice on open or slushy waters expanding travel and fishing opportunities. Fox markings have begun to exhibit blood in their urine, signaling the beginning of their mating season; coyotes will be soon to follow. With sunny days and milder temperatures the rest of this week and into the weekend, snowshoers and outdoor enthusiasts should be looking to get out and enjoy the beautiful winter weather.

Due to recent warm weather, the ice is receding in the lagoon at Lakeshore State Park. The area north of the pedestrian bridge is open water, and some fishing has been able to be done by boat in the Milwaukee Harbor, nearby Lake Michigan shoreline and within the north portion of the lagoon. Trails are currently free of snow and ice, and the park is mainly snow-free.

Ski trails at Mirror Lake State Park are in poor shape after the warm weather. Park staff are waiting for next chance of snow on Sunday. A couple areas are open for hiking. Ice flows have been seen at Fern Dell Gorge.