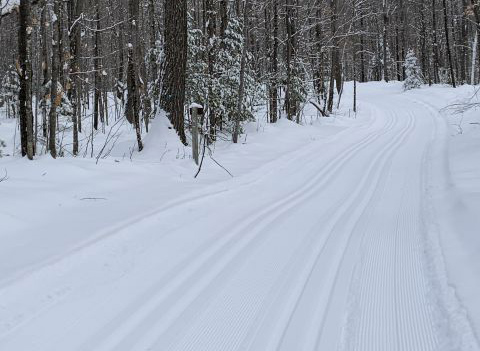 With up to 7 to 8 inches of new snow this week, some areas up north have over 20 inches. Most northern parks and forests are grooming cross-country ski trails with some in good to excellent condition. As of this week, the only open snowmobile trails on the travelwisconsin.com Snow Conditions Report are in Ashland and Iron counties. Many northern lakes are ice-covered, but many are unsafe as the heavy snow cover is keeping the ice from freezing solid.

Muzzleloader deer season ended mid-week and gives way to a statewide antlerless-only hunt that runs through the weekend. Deer are keying in on food sources such as acorns and standing corn.

Bald eagles are starting to show up in higher numbers along the Wisconsin River, particularly in the Sauk Prairie area.

No fishing reports this week.

This will be the last week pheasants will be stocked on the properties that receive game farm birds in the county, other than Mud Lake Wildlife Area, which will receive birds once more before the holidays. New this year, the goose season has a split, which means that currently, there are no open waterfowl seasons. The waterfowl closed areas at both Mud Lake and French Creek Wildlife Areas are now open to hunting until the goose season reopens on Dec. 16.

Muzzleloader deer season ended mid-week and gives way to a statewide antlerless-only hunt that runs through the weekend. Central farmland tags that came free with your license are only valid south of County C and East of Parkway Road (see the regulations for a detailed map). To hunt in the northern forest zone, you must have an unfilled bonus tag you purchased back in August. All hunters (including bow and small game) must follow blaze orange/pink requirements. Deer are keying in on food sources now with acorns and standing corn both being heavily sought after.

Sandhill cranes continue to flock in huge numbers in the Portage Area. A good viewing spot during the day is generally in the fields along County Hwy U between the Baraboo and WI Rivers just into Sauk County, where hundreds, if not thousands, have been congregating as of last week. Goose Pond near Arlington is also seeing record numbers of geese and swans utilizing the refuge before ice up - which could occur with colder temps predicted this week. Eagles are starting to show up in higher numbers along the river, particularly in the Sauk Prairie area.

As of Dec. 10, there are over 20 inches of snow throughout the county. Some Iron County snowmobile trails are open and in good condition, but lake ice is not safe so snowmobiles should stay off lakes. All cross-country ski and snowmobile trails are open in Iron County and in excellent condition. After this weekend, all downhill skiing and snowboarding hills will also be open in the area. The deep snow is limiting hunting access for hunters and hounds. So far, a crust layer has not formed on top of the snow, which can be troublesome for wildlife and hunters.

Most of the snowmobile trails remain closed in Marinette County due to downed trees and low hanging branches. Ski trails at Kirby Hills west of Crivitz appear to have a groomed base but could use more fresh snow will improve the conditions. There are two ungroomed ski trails on Peshtigo Harbor Wildlife Area that can be used at your own risk. Those trails have not been evaluated following the heavy snow.

Ice is finally forming a thin layer on most of the lake at Devil's Lake State Park. Geese are still occupying the non-iced areas of water. There is only a dusting of snow on the ground.

The snow depth at Flambeau River State Forest has settled with the recent mild temps after the large amounts of snow in the last couple of weeks. The Flambeau Hills Ski Trail system is not groomed yet due to mechanical issues with our grooming unit. Area lakes vary greatly in ice conditions. Some lakes are open while others have up to six inches of ice. Use caution when going out on the ice.

Ski trails at Lake Wissota State Park were groomed for classic and skating Dec. 10. Everything is in good shape and they firmed up nicely. Some areas are a little uneven just because there is so much snow to groom in and there is some debris due to the high winds. But overall it is excellent. These are really nice scenic trails because they cut through the woods and are narrow...just wide enough for a skate lane with a classic track on one side. Not a lot of hills but it's made up for in ambiance.

The restored prairies and woodland trails of the MacKenzie Center are a perfect place to hike and observe the natural world. Possible wildlife sightings include white-tailed deer and raptors, such as red-tailed hawks.

The storm from Dec. 1 dropped about 10 inches of heavy, wet snow in northern Door County. Many trails at Newport State Park have trees down and limbs laden with snow covering the trails: some are impassable. Fern and Europe Bay Trail are open from Lot 3 to Europe Bay Road, and it's been groomed and tracked for classic skiing. Monarch Trail has also been groomed and tracked. Both trials are considered multi-use trails: hikers and snowshoers are asked to keep off the tracks.

About 1-2 inches of new snow fell this week. Ski trails are Whitefish Dunes State Park were rolled and packed on Dec. 10. The trail base is very thin and will continue to build up with new snow in the coming days. Trails have the usual amount of debris and snow is extremely thin under the Cedar and Hemlock canopies in a few areas. For those who want to use rock skis to ski with no track, the trails will be adequate.

The Afterhours Ski trails at the Brule River State Forest were groomed for skate cross-country skiing Dec. 11 and are in good condition. The entire trail system is rolled. A few inches of snow are forecast Wednesday night and crews will be working to groom and track the majority of the trails on Thursday. Ski conditions should be very good by this weekend.

With 7 inches of new snow overnight, the MECCA trails at the Turtle-Flambeau Scenic Waters Area were groomed to perfection Dec. 10. Some soft spots but overall excellent conditions. Trails are on rolling glacial terrain through pine, spruce and tamarack forests. A heated chalet with a vault toilet, wax bench, and changing room is located at the Cabin trailhead. There is a second trailhead at the Little Turtle Flowage parking lot.

Ski trails at Governor Thompson State Park and the Peshtigo River State Forest were groomed for skate and classic cross-country skiing and were tracked on Dec. 10. Otter trail is excellent to good condition groomed and tracked. All other trails are rolled and untracked, but grooming should occur by the weekend.

Several more inches of snow fell this week. Grooming has begun on the ski trails in the Northern Highland-American Legion State Forest. Escanaba trails were groomed for classic cross-country skiing and were tracked on Tuesday, Dec. 10 and are in good condition. Really nice track for early season. Measured 14 inches of snow on the picnic table at Escanaba research station. Madeline trails were groomed and tracked Dec. 10 and are in excellent condition. There are a few locations with some low-hanging branches / trees, but the majority of the trail is in excellent condition.