More and more leaves are changing across Wisconsin as the fall color begins to peak across the northern half of the state. Those living further south are in for a treat as the leaves are just starting to turn. You can still discover the best fall colors in Wisconsin with the official Travel Wisconsin Fall Color Report.

The state continued to receive its share of rain last week, leaving Lake Michigan tributaries running high and clarity low. Between the rainstorms, anglers were still fishing fall salmon runs, especially at Oak Creek, where anglers were standing shoulder to shoulder. Deer activity is picking up with plenty of scraping, so bucks can make their presence known. High water levels continue to make it challenging for waterfowl hunters, who are finding birds spread out. Ducks, geese and cranes are slowly moving in with a big push of birds are expected this weekend. For more on Wisconsin's outdoors, check out the full Outdoor Report below.

The number of anglers going out on Lake Michigan in Sturgeon Bay has dwindled to only a handful. Bailey's Harbor anglers targeting salmon from the shore managed to catch a few throughout the week. Heins Creek is still holding the most salmon/trout out of all the creeks. Anglers fishing on the bayside were mainly targeting smallmouth bass with a few anglers targeting salmon. Smallmouth bass anglers had decent success last weekend, with fish being caught ranging from 15 to 18 inches.

Fishing activity on the Pike River in Kenosha was low this week. Only a few anglers were spotted fishing for salmon at the mouth of the river. There were plenty of anglers fishing the shorelines and piers in Kenosha, targeting salmon and trout.

Kewaunee River fishing pressure was moderate during the week and increased towards the weekend. Those who had success typically caught one to two chinook salmon. Recent rainfall has caused the water level to stay high and the clarity to stay very low. Algoma fishing pressure was moderate this week; most anglers were fishing the Ahnapee River. Early in the week, a decent number of Chinook were caught below the dam off the County Road J bridge.

Rain and high winds kept angling efforts down this week in Marinette. A few anglers targeting Chinook salmon were seen at the Little River boat launch fishing from shore and upstream at the Little River Road crossing. The Menominee River was producing a few brown trout from shore anglers. Anglers reported hooking both chinook and pink salmon also but not being able to land them. Boat anglers fishing upstream from the Highway 41 bridge were catching smallmouth bass and a few walleyes on crankbaits.

Rain throughout the week limited the number of boats launching out of McKinley, but those that did go out had a fair amount of success with kings inside the harbor. Additionally, many anglers fishing off the ramps were having success with kings. A few anglers were also catching kings from the western end of the pier.

A fair number of anglers were fishing the shoreline near Lakeshore State Park during breaks in the rain. Most successes from the shore came from the anglers fishing off the ramps at McKinley.

Rain all week led to flooding on the Milwaukee River, which limited anglers' access. Fast-moving water from Kletzsch Park to the mouth of the river made fishing nearly impossible. Oak Creek was incredibly busy this week, with anglers fishing shoulder to shoulder. All anglers were targeting kings, and nearly all anglers saw some action. Most kings were caught near the dam, but access was limited during the week due to flooding.

Only a few shore anglers were seen at Oconto Park II (North Bay Shore Recreation Area) with bluegills and bass being caught off the docks, but size was small. Some brown trout and pink salmon were seen at Stiles Dam on the Oconto River.

Sauk Creek in Port Washington was running incredibly high and fast, making it unfishable. Anglers focused their effort primarily within the marina, with a few chinook catches recorded.

Water levels on the Root River in Racine increased drastically over the past week, as did the fishing activity. The river upstream of the Steelhead facility saw lots of activity this week. Fly fishing was the most common fishing method among the anglers. The average fishermen walked away with one to two fish. Anglers enjoyed catching a mix of king salmon, coho salmon and brown trout.

A few anglers were fishing the Sheboygan River and caught several Chinook at Kohler Dam.

Duck hunters in northern Columbia County are taking advantage of recent rains by using the high water to get into some of the usually hard to get to hunting spots. Only local ducks have been reported and no migrants have been seen in the area yet. Archery hunters have been taking some deer pre-rut. The cooler temperatures have triggered the beginning of the fall fish bite on local lakes and river systems.

Deer activity in the woods is in full swing around Eau Claire. Scraping activity is evident along travel corridors, and apples have started to drop.

Water levels continue to be high throughout Outagamie and Calumet counties, which is making deer and small game hunting difficult for most hunters. The high waters are even causing problems for waterfowl hunters, who are finding the birds are spread out. Waterfowl hunters without a boat or a dog to retrieve game are also struggling to find spots where water does not go above their head. Anyone who is using a boat or canoe to access a hunting spot is asked to remember that life jackets are required to be on board.

This is a notice for any bow hunters or other folks planning to enjoy the Little Plover Fishery Area during the fall. Please be advised that the University of Wisconsin - Stevens Point faculty and students will be performing numerous forestry management activities at multiple locations through the Little Plover Fishery Area from Oct. 17-22 and Nov. 2-9. These activities will be particularly prevalent in the Land adjacent to CTH R, Roosevelt Drive and Bluebird Drive.

Extreme caution is to be used while recreating on the Horicon Marsh and Mud Lake State Wildlife areas after heavy rains. Strong currents and moving cattail mats change navigation routes spontaneously. Ducks, geese and cranes are slowly moving in and a big push of birds is expected Friday and Saturday nights. With last week's rain, many fields have standing water, so waterfowl and wading birds are widely dispersed.

Visitors are coming to visit the Council Grounds State Park to view the fall colors, and they are reporting sightings of deer, geese and ducks. The bucks that are being seen are without their velvet coats, which does not coincide with scrapping since this park is not notoriously known for large bucks. Geese are in major migratory patterns heading down south and landing in the water around the park.

At Pattison State Park, the sun finally broke through the clouds on Sunday, allowing the fall colors to show all their beauty. Colors are at peak. The picnic area at Little Manitou Falls was golden, backlit by the sunshine, making for a beautiful scene.

The lovely autumn color will quickly disappear at the Northern Highland American Legion State Forest with the cold weather incoming, so one is encouraged to get out during the week and enjoy the splendor on the area trails and lakes. Water levels remain very high, so bring waterproof footgear.

The Flambeau River State Forest has great fall colors with plenty of opportunities to either view on the river or while on a drive down forest roads. The river is above average for water levels with all the recent rain. River canoe sites along with Lake of the Pines Campground remain open while Connors Lake Campground closed at the end of September. Water systems will be shut down this week. The grouse and archery whitetail seasons are here with seemingly endless areas to recreate. 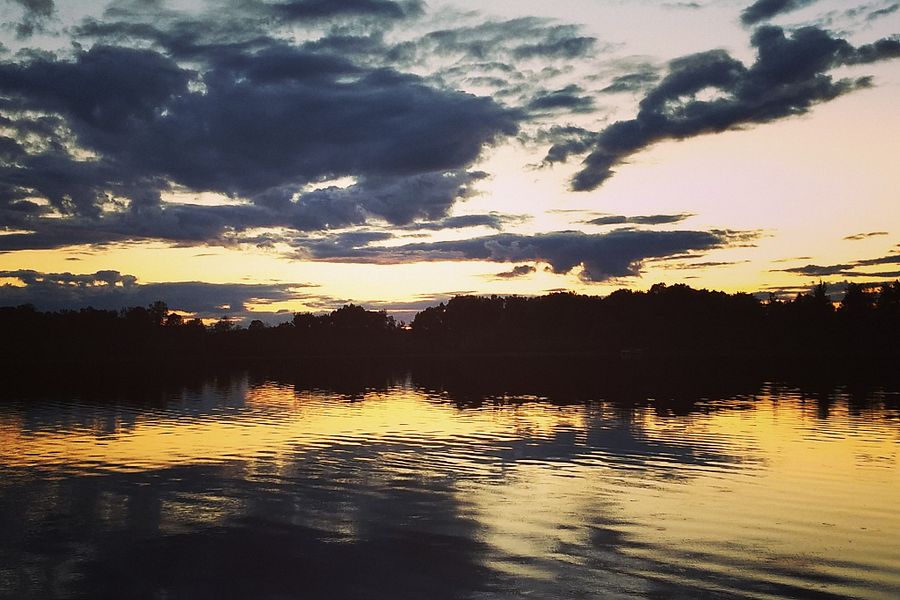 Fall colors are just beginning to peak out at the Kettle Moraine State Forest - Southern Unit. However, the prairie is already providing beautiful fall colors. Arriving at the Scuppernong springs in the morning may provide excellent photo opportunities as mist rises from the river. Keep an eye out for warblers still moving through the area and try to spot the first juncos coming from the north. 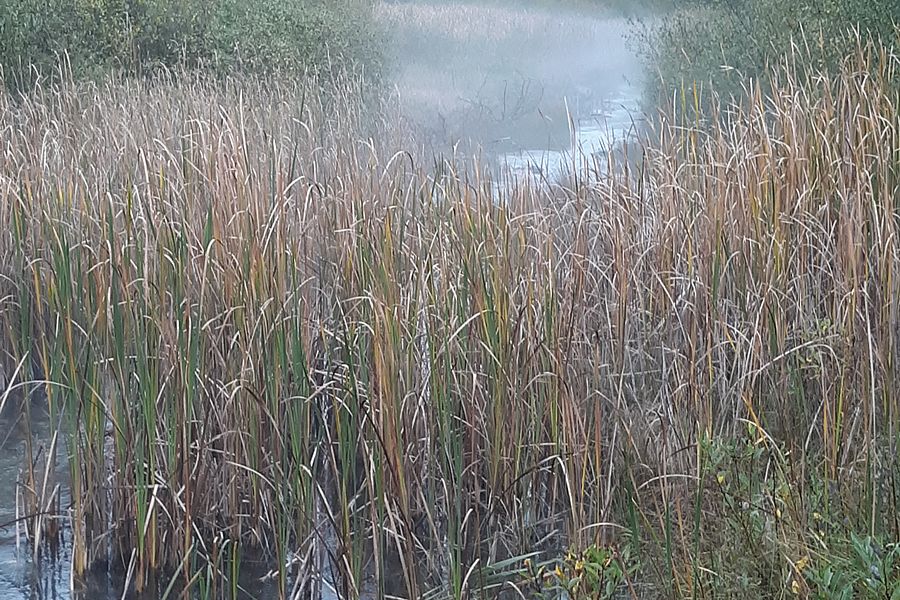 The main gate and camping at Roche-A-Cri State Park are now closed. Parking is in the winter lot on Czech Avenue, and park stickers are required. Trails are in good shape for hiking and only a small amount of fall colors.

Fall colors are at peak condition at Amnicon State Park with about 90% color change. The campground is open, and the season is perfect for getting out and exploring the park. Midweek, many campsites are available, and drinking water will be on, but next week, it will be shut off. Visitors have been enjoying hiking and viewing the fall colors. As of last week, the Amnicon River was up four feet but is now back to normal levels.

Color is starting at Governor Dodge State Park -- mostly yellows; however, rain is taking down many leaves already. Fall weather keeps campsites close to full every weekend. Reservations are still suggested through October.

Shorter hike-in campsites at Buckhorn State Park are still open and non-reservable. Far campsites are now closed. Cooler weather is coming, and winterizing has started. RVs can use the frost-free spigot at the park office or fill water in a campground as the dump station is shut down. Hunting maps are available for park and wildlife areas. Boat piers will be removed Oct. 23.