Fall color is now past peak statewide, but there are still some maples holding leaves in the southern part of the state and oaks are just reaching the peak of their rust and auburn shade.

Temperatures were hovering between the 30s and 20s in southern and central Wisconsin, with much colder temps in the north where days were in the teens and evenings started to trend toward single digits. In Mercer and Iron County, the snow is becoming crusty and hard, making tracking tough for hunters and trappers alike. There were a couple inches dropped overnight, brightening the Brule River State Forest landscape. An upcoming week with highs in the 40s will likely remove much of that surface cover.

The cold snap may have made it seem that ice fishing is right around the corner, but the warm-up will likely delay any firm ice for fishing. The fall walleye run has really picked up on the lower Wolf River and the Fox River near Oshkosh. Many anglers are reporting limits, with catches of white bass mixed in. The fall walleye run often stays strong right until the water ices up.

Anglers on the Oconto are still landing panfish, with minnows going out for crappie and crawler chunks for blue gill. Anglers at the mouth of the river are catching perch and rock bass in addition. Those fishing the Menominee River in Marinette County were landing walleye, browns and steelhead from the bridge on 41 up to the Dam at Hattie Street.

The white-tailed deer rut is on and going strong, with many deer moving through the day. Harvest for the archery season is progressing and updated harvest numbers can be found on the DNR website. The traditional nine-day gun deer season is now just a little over a week away, so if you haven't sighted in your firearms yet time is running short. Check the DNR website for shooting ranges and for additional information about the upcoming season.

Cooler weather has also boosted raccoon trapping activity and hunters are reporting successful takes. Woodcock hunting has shut off in the north but hunters were still out after grouse.

Tundra swans are being observed in large numbers around Horicon Marsh and at other traditional stopover sites off the Mississippi River near La Crosse and the Goose Pond Sanctuary in Columbia County. Canada geese, sandhill cranes and ducks are all still making a strong showing. Also of note are additional sightings of snowy owls. 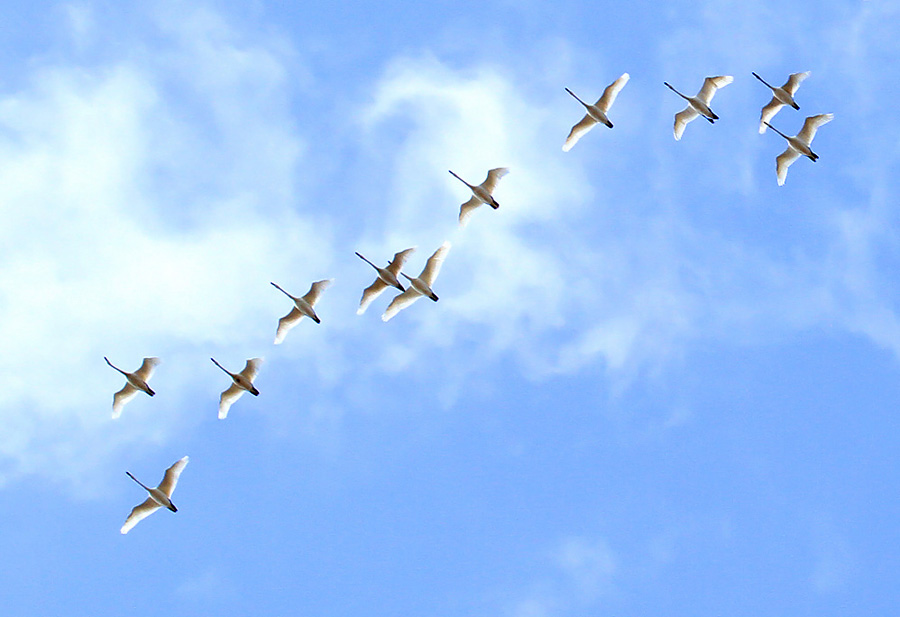 A reminder that several state campgrounds are open throughout the winter, many sites operating on first-come first-served basis. For those planning an upcoming snowshoeing or skiing trip, don't forget about this opportunity to wake up, step outside and hit the trails.

And if you're interested in making your own holiday wreaths or greenery both the Kettle Moraine State Forest Northern Unit and Richard Bong State Recreation Area have upcoming workshops. For all events, search the DNR website for "Get Outdoors."

Tundra Swans infiltrated the state in large numbers on Nov 6, making traditional stopover sites, such as the Mississippi River near La Crosse and Goose Pond Sanctuary in Columbia County, worth visiting between now and ice-up. Also of note are additional sightings of snowy owls. Updates, a map of sightings, and tips for finding them can be found at dnr.wi.gov, keyword "snowy owl." - Ryan Brady, Bureau of Wildlife Management research scientist, Ashland

Brule River State Forest - An inch or two of snow overnight has whitened up the landscape again. Temperatures have also been unseasonably cold-just 14 degrees this morning and expected to be in the single digits tonight! The forecast for next week is for highs around 40 degrees, which will seem quite warm, but is actually normal for this time of year. Deer archery hunting is in full swing and the deer gun season is only nine days away. Deer harvest numbers are available at /topic/wildlifehabitat/harvest/deerharvest.html This page also contains a link to Wisconsin's Deer Metric System. Metrics are information that is used to measure or evaluate various aspects of deer management such as harvest and population trends, hunter surveys, deer health and impacts. A reminder that fishing on the Brule closes next week-Nov 15. With the cold weather we've been having, area lakes have a good start on forming ice. It won't be long before ice fishing enthusiasts will be on the lakes enjoying their sport. Our campgrounds are open all winter. All sites are first-come, first-served from Nov. 15 until March. Reservations for March 23 through Nov. 15, 2018 can be made up to 11 months in advance at ReserveAmerica.com or 1-888-947-2757. There are already a few reservations in the system for next summer's holiday weekends. - Diane Gobin, visitor services associate

Iron County - It's cold! The snow that is left in the upper two-thirds of Iron County (about 6 inches or so) is crusty making hound hunters hesitant to run their dogs. Tracking is difficult as well for both hunters and trappers alike. Skim ice is building making rat trapping difficult. Southern Iron County is snow free. The rut is on and deer are moving. Many hunters I have spoken with are happy with the increase in deer seen although bucks still seem to remain nocturnal. Woodcock hunting has shut off but grouse are still being sought after. If the weather persists, we'll have ice fishing before we know it! The only trees with leaves left on them are oaks and a few aspen. No fall color left here. - Jenna Kosnicki, wildlife biologist, Mercer

Crex Meadows State Wildlife - Because the cold weather has frozen many of the ponds and marshes, many songbirds and water birds have left for the winter. Despite the cold weather and snow we have been getting in the Grantsburg area, there are still many other species around this week. There was a rare sighting of a whooping crane (Grettum Refuge) and two cackling geese this week, so be sure to keep your eyes open for those. There are still many Canada geese and many different species of ducks on Refuge Extension Flowage. This week, we also had our first reports of tundra swans on Phantom Lake, and snow buntings in various places around Grantsburg (including Crex Meadows and Fish Lake Wildlife Areas). Other Highlights were sharp-tailed grouse, rough-legged hawks (the highest numbers we've ever had), northern shrikes, tree sparrows, and common redpoll. Species with high numbers were sandhill cranes and tree sparrows. Species with low numbers were trumpeter swans, ring-necked ducks and pied-billed grebes. Barred owls and great horned owls were also seen around the area, as well as a golden eagle.

Flambeau River State Forest - The Flambeau River water levels are moderate. The lakes are still free of ice but the temperatures have been low and the water temperatures are dropping. Deer are moving a lot and the bucks are in the rut. When hunting on the Flambeau River State Forest be aware that elk calves are about the same size as an adult deer. Hunters are cautioned to be sure of their target in order to insure the safety of the protected elk. Bird migration is still in progress and the bears are denning up. There are a few timber sales cutting on the Forest as the woods are very wet. Most logging operations are waiting for freeze up. The Flambeau Forest ATV/UTV trails closes for the season on Nov. 15. The weather forecast for the weekend calls for increasing clouds Friday with a high of 25 and a low of 20. Saturday, Veterans Day, snow showers likely, with a high near 34 and a low of 26. Sunday, partly sunny with a high near 35 and a low of 23. - Diane Stowell, forestry technician advanced and visitor services associate

Note: most creel clerk reports have concluded for the fall. Reports will resume when ice fishing begins.

This report is for the week of Oct. 29 through Nov. 4. Most of the trailers at the landings belonged to water fowlers, who report very good hunting conditions. For anglers, the cool, wet and windy weather has kept their numbers down.

Marinette County - The only interviews in Marinette County came from the Menominee River where anglers are catching walleye, browns, and steelhead mainly from the 41 bridge up to the Dam at Hattie Street. Live bait, spoons, and crank baits have been catching some very nice fish. - Kevin King, fisheries technician, Peshtigo

Oconto County - A few panfish are still being caught below the Dam at Stiles on the Oconto River, minnows for crappie and crawler chunks for blue gill. Anglers at the mouth of the Oconto River are catching a few perch, rock bass, crappie, and bluegill. Live bait is being used. Panfish and perch are being at Oconto Park II using live bait. All boaters interviewed this past week were water fowl hunters. - Kevin King, fisheries technician, Peshtigo

Winnebago County - The fall walleye run has really picked up on the lower Wolf River. Sounds like many anglers are catching limits of walleyes with a good share of white bass mixed in. Walleyes are mostly from two distinct size/year class with 10-12 inch fish from the abundant 2016 year class and then nice eater size walleye in the 15-20 inch range from the 2013 year class. Best presentation seems to be drifting with a jig and a minnow. This fall run usually stays pretty good right up until ice up. I would venture a guess that white bass and/or walleye fishing is pretty good in the Fox River in Oshkosh and the Wolf River in Winneconne as well. - Ryan Koenigs, fisheries biologist, Oshkosh

Wyalusing State Park -Leaves are falling from the trees and now have lots of colorful leaves covering the ground. Fisherman have been fishing at Glenn lake and have been very successful. Sighting of deer have been plentiful now that the corn and beans have been picked. Hikers have been walking the trails to see the beauty of the Mississippi and Wisconsin Rivers. Campers, camping on the Wisconsin Ridge Campground have been watching the bald eagles soring over the rivers and the bluffs. Shower Building and Dumping Station are closed for the season. Winter water supply is available. - Pam Dressler, visitor services associate

Horicon Marsh State Wildlife Area - Tundra swans have been seen in larger numbers in a variety of areas around Horicon Marsh but are most prevalent along Highway 49. Canada goose and Sandhill crane numbers are still high and duck variety is still good, although numbers seem to be diminishing. Be sure to visit the Horicon Marsh Education and Visitor Center and the new Explorium this fall! N7725 Hwy. 28 in Horicon. Even though the weather has cooled, migration is still in full swing. - Elizabeth Herzmann, natural resources educator