The regular nine-day Wisconsin gun deer season opens this Saturday, November 19 and state wildlife officials are enthusiastic about the season, with the early archery and crossbow harvests ahead of last year harvest-wise and many hunters reporting increased deer numbers in many areas of the state. 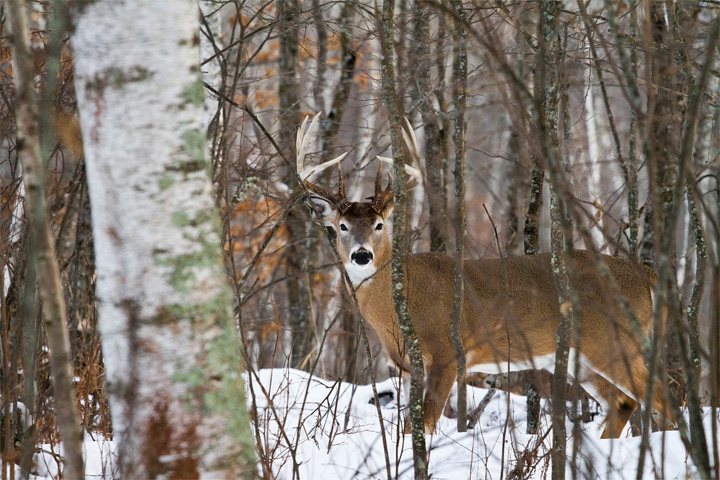 There are also some major changes in store for hunters this year so if they haven't already, they should brush up on the new regulations. Search the DNR website, dnr.wi.gov, for keyword "deer" to find a wealth of information about the new rules, including A Deer Hunt 2016 - What do you need to know [PDF] factsheet and answers to frequently asked questions. One major change is the elimination of backtags and along with that, a change to a paper registration tag that hunters can print off directly from the new "Go Wild" website. An associated change is that hunters no longer have to immediately tag their deer. They only need to affix the tag when they will no longer be in possession of the deer. Hunters can find out more on the "tag it" page of the Go Wild website. They can also watch the entire 2016 Deer Hunt Wisconsin television show produced Dan Small of Wisconsin Public Television on the DNR's You Tube channel, which includes a game registration tutorial.

There is a change in the forecast from the recently unseasonably warm weather Wisconsin has experienced, with temperatures expected to drop into the lower 30s and 40s opening weekend, with a possibility of some tracking snow in the far north.

Hunters in the Flambeau River and Black River state forests are also being reminded to make sure of their target and be sure it is not an elk. This year's elk calves are about the size of a big whitetail doe.

Small game and archery hunters are reminded that blaze orange or pink is required when hunting during any gun deer season, including the muzzleloader deer season. And with the recent mild weather keeping many people active in the outdoors, visitors to state park properties should note that hunting is now open on many properties, including most state parks, so all visitors are strongly encouraged to wear blaze orange or pink.

With the approach of the gun deer season and some cooler and windy weather, there has only been a light amount of fishing pressure on waters across the Northwoods. There are still a few musky anglers out trying their luck and success has continued to be good and quite a few catches have been made, with some musky up to 46 inches being reported. There has also been a bit of fishing pressure on the managed trout lakes and success has been fair. There have been no reports of ice on any lakes or flowages and it looks like any kind of ice cover should be well after deer season.

November 19 10 a.m.-1 p.m. Restore Chiwaukee Prairie SNA . Help Chiwaukee Prairie Preservation Fund volunteers during our monthly workdays on the third Saturday and enjoy the beauty of this rich prairie in the process. Remove invasive brush threatening the prairie. Bring a bag lunch to eat afterwards. No skills needed you will be trained onsite.

Brule River State Forest - While the past week brought warmer-than-normal temperatures, snow is just around the corner. The forecast for the coming week includes daytime highs in the 30s and 40s, and some snow showers. Soon we'll be seeing hunters in the woods in their blaze orange, and new this year, fluorescent pink. The gun deer season starts on Saturday, Nov. 19 and runs through Nov. 27. For details on the regulations for this year, go to dnr.wi.gov and search "deer" or stop by your nearest license dealer or DNR service center to get a copy of this year's regulations. Trout fishing closed Nov. 15 on the Brule River. Each fall, a portion of the Brule River is surveyed to evaluate the steelhead population. This year, brown trout were also evaluated. A stretch of the river above and below Highway 2 was electro-fished on Nov. 16. A specialized boat delivers an electrical current into the water, which temporarily stuns the fish. The fish are netted and held briefly until they can be processed. The fish are measured, weighed, and a few scales are taken. The fish are then returned to the river. The collected scales are later "read" to determine the age of the fish. Fish scales have annual growth rings, much like trees. The After Hours Ski Trail warming shelter is getting close to being completely enclosed. The roof is shingled, and windows and doors will soon be in place. The building should be ready for use by ski season. 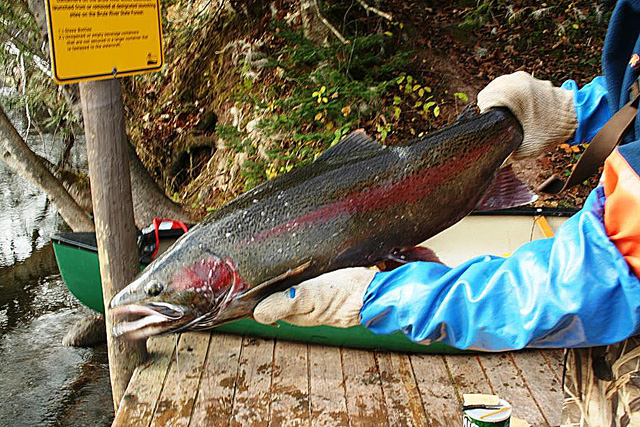 Upper Chippewa Basin fisheries report (Price, Rusk, Sawyer Taylor and inland Ashland and Iron counties) - With the approach of the gun deer season and some cooler and windy weather, there has been a light amount of fishing pressure on waters across the Northwoods. There are still a few musky anglers out trying their luck and nearly all of these late-season fishermen have been dragging large suckers around. Success has continued to be good and quite a few catches have been made, with some musky up to 46 inches being reported. There has also been a bit of fishing pressure on the managed trout lakes and success has been fair. A few of the lakes have received adult brood stock trout from the hatcheries and some nice rainbow, browns and brooks have been landed in the past few weeks. There have been NO reports of ice on any lakes or flowages and it looks like any kind of ice cover should be well after deer season. - Skip Sommerfeldt, senior fisheries biologist, Park Falls

Flambeau River State Forest - Gun deer season starts this Saturday, Nov. 19 and bucks are still being observed traveling, buck rubs and scrapes are being seen, and large necks on the bucks indicate the bucks are ready. Does are in full estrus and reproduction in the whitetail deer herd is in full speed ahead. Elk are forming cow and calf groups with some of the young bulls. The big bulls are forming bachelor groups. This years' calves are the size of a big doe. When you are out hunting be sure to know your target and what's beyond. Remember that hunting stands are not allowed overnight on the State Forest. Game carts and drags are available at the forest headquarters for free use to remove downed game. The special deer hunt camps are beginning to be set up for the opener. Grouse numbers are fair to good. Bird hunters seem to be happy with the amount of activity they have seen. Waterfowl are leaving area lakes. Water levels are still higher than normal this time of year due to the amount of precipitation we've received. Some adventurous people have been floating the river and enjoying the ride even though the temps are cool. Musky fishing on the Flambeau River, Connors Lake, Lake of the Pines, Mason and Evergreen lakes has picked up. Fishermen have been fishing for walleye and have had lots of success. The invasive plants, honeysuckle and buckthorn still have their green leaves. ATV/UTV trails are now closed for the season. Snowmobile trails will open when there is enough snow to groom the trails. The weather forecast for this week is for a chance of rain Thursday night and Friday, and Friday night snow likely. Saturday has a slight chance of snow before noon. Sunday should be mostly sunny , with a high near 31. - Diane Stowell, forestry technician advanced and visitor services associate

Creel surveys have ended for the season.

Potawatomi State Park - Leaves are off the trees, allowing the sun to filter through the forest on hazy autumn days. As of Nov. 17, the launch piers are still in the water. The piers may be pulled from the water at any time in November, depending on the pier removal company's schedule. The campground will be without power on Monday, Nov. 28, to allow tree trimming over the power lines. Power should be restored before the end of the day on Tuesday, Nov. 29. Some areas of the park are open to hunting and trapping from Nov. 15 to Dec. 15.

Creel surveys have concluded for the season.

Racine County - The outlook for the upcoming gun deer season in Racine and Kenosha Counties is looking up. Reports from the area indicate that more deer are being seen and movements have increased in recent weeks. Crops have also been harvested in the majority of the fields in the area, improving visibility and access. The department is again providing locations for hunters to provide samples for free CWD testing for adult deer. Hunters can go to Artisan's Taxidermy and Berndt's Hide Service in Burlington and Ron's Service Station in Waterford. Hunters should check the DNR website, using the keyword "CWD Sampling", for locations and open times. At the Richard Bong Recreation Area a kiosk box next to the firewood shed by the headquarters is available for hunters to drop off heads for sampling 24 hours a day. There will be no pheasant stocking on the local public hunting grounds during the week of gun deer season. Stocking will resume the week of Nov. 28 and a final stocking will occur the week of Dec. 5. Pheasant stocking will continue to occur on the Richard Bong Recreation Area during the gun deer season and will continue through the early part of December. - Marty Johnson, wildlife biologist, Sturtevant

Rock County - The gun deer season is the busiest time of year in the woods, so being visible is very important. Small game, archery, and gun-deer hunters are reminded that blaze orange or pink is required when hunting during any gun deer season, including the muzzleloader deer season. Blaze orange or pink are required to be worn by hunters, but other outdoor users, such as hikers and dog-walkers are also warned to be as visible as possible to avoid being in the line of fire. Pheasant hunters have seen continued success, and Wardens continue to see birds on all stocked public hunting grounds. A reminder that ground blinds and elevated devices must be completely removed from state properties each day at the close of hunting hours. Hunters on DNR-managed lands are reminded that tree stands cannot be left overnight, and if unattended during the day the hunter's name and address or DNR Customer ID number must be visible from the ground. A number of public hunting grounds are open throughout Rock County, including state-owned lands, Federal Waterfowl Production Areas (WPA) and Voluntary Public Access (VPA) lands. VPA properties within Rock County can be located by searching the keyword "VPA" on the DNR website or by stopping by the Janesville DNR Service Center. - Boyd Richter, conservation warden, Janesville

Buckhorn State Park - Small game hunting and trapping in the state park started Nov. 15 (check map or with park staff as some areas are bow hunting only and one park area is gun or bow). Hunting maps are available online or at the park office. - Heather Wolf, park manager

Roche-A-Cri State Park - Hunting in the state park started Nov. 15. Hunting maps to check out areas open and closed to hunting can be found online or at the park office. - Heather Wolf, park manager